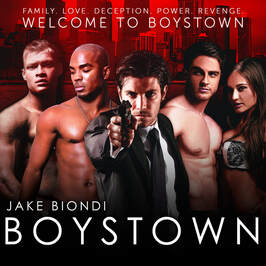 The Mancini brothers -- as well as their friends and significant others -- are at the core of BOYSTOWN.  Emmett Mancini, the youngest of the brothers, is a bright, caring guy whose boyfriend Keith Colgan has a past Emmett knows little about . . . yet.  Derek Mancini, and his wife Joyelle, are BOYSTOWN's straight couple . . . but a recent encounter with hunky Cole O'Brien could have life-altering consequences for Derek.  And when Justin Mancini, the oldest brother, arrives in BOYSTOWN, he brings with him a family history that both Emmett and Derek were hoping to forget:  a bitter feud with the powerful Ciancio family.

Interracial couple Logan Pryce and Max Taylor have been together have survived the ups and downs that are common in most long-term relationships; however, they must now face a crisis that neither of them ever expected.  A chance encounter with an old flame sends Max on a mission to discover a secret buried long ago . . . and tests the strength of his commitment to Logan.

One of the most diverse and lively neighborhoods in the country, Chicago's Boystown has something for everyone.  So it's no wonder that roommates Jesse Morgan and Cole O'Brien chose to live there upon graduating from college.  Ready to begin the next phase of their lives in an exciting new city, Jesse and Cole quickly find themselves at the center of the drama and intrigue that makes up this adult playground. Against the backdrop of the vibrant Chicago skyline, some couples are brought together while others are torn apart, once-buried family vendettas are resurrected, and friends unite to face the challenges that life throws their way.

"A series worthy of recognition."
Amazon.com

"I can say without a shadow of a doubt that nothing truly compares to the BOYSTOWN series by Jake Biondi. Not Queer as Folk, not Eastsiders, not Dante's Cove or The Lair. None of them can equal the drama contained in each season of the BOYSTOWN novels."
Todd H. Latoski, Amazon.com

"Jake Biondi is one of the most masterful writers of fiction of our time.”
Roger Ward, Amazon.com

"Jake Biondi has a way of writing a story that sucks you in from the first word on the page to the last word on the last one. I would put his writing abilities against any screenwriter of any soap opera that’s on TV today and still call him the best. His characters are extremely engaging, his story lines are superb, and the cliffhangers will leave you breathless and waiting in eager anticipation to see what happens next.  This series is not just a good read, it’s an amazing read and one that I would highly recommend.​"
Love Bytes Reviews

"Jake Biondi is more than a five-star author! He's a star of his own, shining bright in the sky."
Amazon.com

“Make no mistake: Jake Biondi’s BOYSTOWN series is one of the most addictive reads
you’ll ever pick up!”
Engraved: All Things Writing

"I could not stop reading this book once I started and it’s been that way with this entire series. The writing isn’t just good, it’s superb!"
Love Bytes Reviews

"I must admit I am addicted to the drama. I definitely recommend the entire series."
Rainbow Gold Reviews

"The storylines continue on, overlap, and create a tapestry of lies and deceit that build from one season to the next."
Joyfully Jay Reviews

"The quick-paced, action-filled plot line keeps you focused on this group of people whose lives are connected in the good times and bad."
Megan Sandwick, Baltimore Outloud

"This series is so full of surprises I couldn't even begin to list them all."
Tonya's Torrid Reads

"This series could completely be made into a television series and I believe that it should be as when reading this series I actually felt that I was watching a drama TV series."
Gay Media Reviews